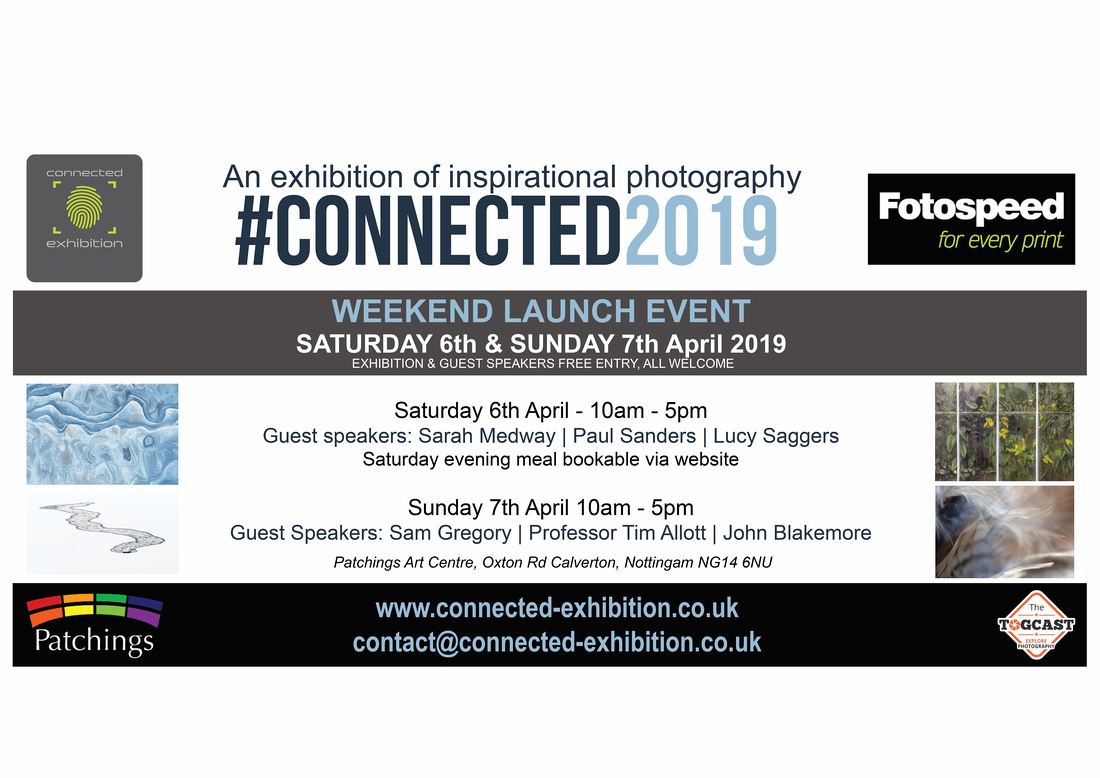 This years #Connected exhibition launches the Saturday and Sunday 6th & 7th April at Patchings Art Centre in Nottingham with another amazing line up of inspirational and engaging guest speakers. The launch event and exhibition is FREE entry as always although we expect it to be popular once again.

The list of guest speakers once again is designed to inspire and challenge you in equal measure, to make you think about your photography and to give you the inspiration to get out there and follow your own passion and creative thread to make photography that is personal to you.

She enjoys exploring the rolling hills and tranquil woodlands of the Eden Valley in Kent where she lives, along with the constant changing weather and light on the nearby south coast. Whilst blue skies may be a perfect day at the beach for most people, Sarah finds the excitement and power of storms and weather fronts are her ideal conditions and inspiration. This creates chaos or calm, but most importantly, interesting light.

She often revisits the same location, fascinated by the familiar transformed by the marriage of light on land, revealing cloudscapes, atmosphere and textures. This approach was put to full use when she was commissioned by Leeds Castle to photograph the castle and grounds over the course of a year, through the seasons and entitled ‘One Year in 900’.

Her photography also extends to her other passion, cats – she is a workshop leader and part of the photography team at The Big Cat Sanctuary in Kent, a centre of excellence dedicated to conservation of the world's endangered cats.

"I am passionate about landscape photography. I love being outside surrounded by the beauty of the world we live in. It never ceases to amaze me, as I watch the storm clouds blow in over the coast, listen to the waves crashing against the rocky shores or watch sunlight stream through trees on a foggy morning, how blessed and lucky we are to have such beauty on our doorsteps.

Landscape photography started as a form of therapy for me, as I struggled to cope with the pressure and stress of my previous job as Picture Editor of The Times. Looking at nearly 20,000 images everyday and the associated responsibilities left me suffering with stress, depression, insomnia and anxiety. Through my photography, I was able to express myself where words failed me. The result is that my emotions are plainly visible in every photograph I take, some are calm, almost meditative and others filled with emotions.

Of all the images I create, long exposures are my favourite. Leaving the shutter open for 5 - 45 minutes to allow the light and elements to move gives an ethereal quality that has a painterly feel to the images.

I don't rely on Photoshop trickery or digital editing to create my images; they are all made in camera with only minimal adjustments - colour balance, exposure and contrast. If I have to spend more than five minutes sitting behind my computer editing, I get bored. I'd rather be creating images in the fresh air than hunched over my Mac.

My work is heavily influenced by art. I draw inspiration from artists such as Turner, Constable, Monet and more modern painters like Mark Rothko and Maria Luisa Hernandez. Like many of these artists, I keep a sketchbook to hand and usually draw the scene around me, making notes of my emotions, sounds, smells and feelings, as I make the exposure. This is very valuable to me, as it enables to me reflect on what I was trying to say, when I originally took the photograph.

Recently my work has been recognised by Fujifilm, who inaugurated me into their exclusive X Series photographers . In addition to this honour I have been awarded Gold medals by the SWPP for my fine art and black and white images.

I have been a professional photographer since 1984, beginning my career as a fashion and advertising photographer. I moved into newspapers in 1991, starting at The Daventry Express before moving on to News Team International, a successful agency based in Birmingham. I was appointed Deputy Picture Editor of The Manchester Evening News in 1996, and two years later moved to Reuters, the international wire service.

I joined The Times in 2002 and became Picture Editor in 2004. In this prestigious role, I oversaw the entire visual look and feel of the paper, as it transitioned from broadsheet to the compact format. During this time, I was instrumental in developing the way images were delivered digitally to subscribers.

At the end of December 2011, I left The Times to pursue my love of landscape photography and launch an after school project for young children to develop their visual and creative awareness through photography. I enjoy sharing my work with others and have spent some wonderful evenings with camera clubs up and down the country. Equally, the joy of working alongside others in a workshop environment or one to one is always a pleasure.

I am a committed Christian, attending Bessels Green Baptist Church and in my spare time I'm a very keen road cyclist and take part in many endurance events around Europe."

Captivated from a young age by the work of photographers like James Ravilious, Lucy took thirty years to follow her ambition of being a documentary photographer.

Lucy’s ongoing project centres on stories and connections of every day lives in her rural North Yorkshire village. It is driven by a wish to record the disappearing traditional way of life, and by a hope to depict a sense of belonging also under threat from the fast-pace world we inhabit.

Ampleforth lies tucked along the hillside in a corner of North Yorkshire, just below the moors. The community has been there since records began and the place, like any other, holds the stories of the lives of its inhabitants. Some were born in the village almost a hundred years ago, some have only been there a short time; some will stay forever, some will soon be gone. For now, the threads of their lives overlap and entwine, leaving impressions on each other and on the place. In turn, the place leaves its mark on them.

Lucy’s black and white photographs depict those unique and yet universal daily moments of life and connection among a community and its landscape.

“Swim around in these deep, deep photographs and then look around your own street, your own village, your own neighbourhood and try and find the timeless stories there because in the end none of us, as Lucy Saggers proves, is very far from the centre of things.”

Sam Gregory is a landscape and fine art photographer based on the south coast of England in beautiful Dorset. Like many it was traveling that first inspired his love of photography, a desire to capture the differing landscapes he encountered around the world as a youngster fired by his curiosity and wonder of the natural world. Originally the image making process was about capturing a memory, but as the years went by the creative possibilities of photography began to take hold and a whole new world opened up.

Now his focus is on working with the landscape to explore its character and revealing some of its wonder, be it seen or unseen. Driven by a desire to show the natural beauty of the world in his own aesthetic, Sam believes there are image making possibilities all around us. Be it in your back garden, local woodland or beach or even in further flung destinations. It’s a matter of learning to be receptive to these scenes and matching that with an increased connection to the landscape, history and ultimately ourselves.

His work has featured in various publications locally and nationally and been used by multiple organisations including The National Trust. Sam’s partner is Italian and as such he has spent a great deal of time in Italy exploring the landscape, learning the language and enjoying the food! Fundamentally he believes that the best image making experiences and satisfaction comes from really getting to know a landscape and culture and then applying your skills to create a compelling visual narrative.

Sam shoots with film and digital set-ups and is comfortable using various techniques from ICM to long exposure and macro, and believes the image making process is multi-step with equal weight being given to each stage. From receptiveness in the landscape to cultivating a visual concept and creating images in the field. Finally finishing with post-processing, printing and presentation to fully realise the vision. 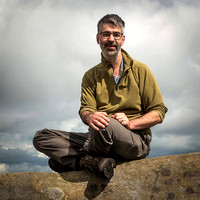 "I am Professor of Physical Geography at the University of Manchester and a keen landscape photographer. My research focuses on upland landscapes: how they function, how degraded landscapes can be restored, and how our uplands can best be managed into the future. I’m currently spending a lot of time on bogs, evaluating how peatland restoration can help reduce downstream flooding. And yes, bogs really are fantastic landscapes to explore.

Tim recently spoke at the #Connected:LandscapeInspired event last November and we enjoyed his talk so much we wanted to bring it to the main event in Nottingham.

In the talk at #Connected he reflected on his fascination with processes in the landscape, and how they are, and are not, represented in landscape photography. It’s quite usual to view and interpret landscape photographs through the events that have shaped the landscape. But some of the most exciting and dynamic contemporary landscape imagery provides direct connections to ‘live’ environmental processes."

Returning to civilian life with an ambition to be a photojournalist, a trip to London resulted in a series of commissions for 'Black Star' agency. Uncomfortable with freelance work I worked in a series of portrait and general studios from the late 1950s to 1970. My personal documentary practice continued alongside resulting in three large exhibitions.

A move to Derby, to teach full time, in 1970 marked the beginning of my landscape work which established me as a 'known' photographer.

We look forward to seeing lots of people at #Connected2019 and hope you are inspired and enjoy your weekend with us.